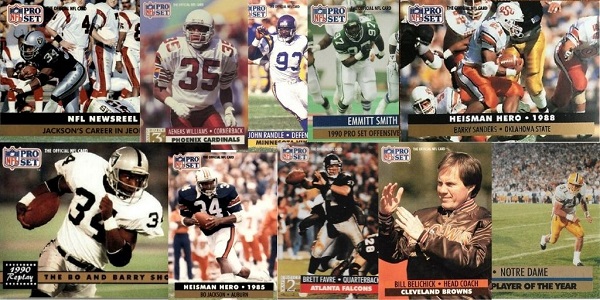 There is nothing special about 1991 Pro Set football cards other than the fact that there are 850 different ones, and about a trillion in the full production run.

Still, even though these things are still available everywhere three decades later, collectors continue to enjoy this issue, with some players rising to the top.

Here, then are the ten most popular 1991 Pro Set football cards as determined by the total number of each submitted to PSA for grading.

We don’t usually think of “rookie cards” when it comes to coaches, but then, most coaches don’t have the pedigree of Bill Belichick.

In fact, he’s the only head coach to ever amass six Super Bowl championships and three other conference titles.

No wonder collectors clamor for this card, pushing it well into double digits for nice graded copies.

Favre was sort of like the Belichick of the pocket (and of the out-of-the-pocket), doing things no other quarterback has ever done.

His entire career was an adventure, but Favre ended up as one of the greatest QBs of all time, and this is one of his many 1991 rookie cards.

So, yep, it’s still popular after all these years.

OK, so maybe there is something special about the 1991 Pro Set set, after all. Namely, a run of Hall of Fame rookie cards, continuing here with John Randle, the six-time All-Pro who terrorized NFL quarterbacks for 14 years.

This RC shows a young Randle just beginning to make a name for himself with the Minnesota Vikings but with his eyes set firmly on a bust in Canton.

Smith made his cardboard debut in 1990, but this card celebrates his Rookie of the Year campaign and gets extra credit for being the first card in a set that threatened to continue on forever.

No matter, though, because Ismail was one of the most exciting players on the college or NFL scene, and he’d develop into a 1000-yard receiver in the pros by the late 1990s.

This rookie card shows a great horizontal action shot of the Rocket scoring against some hapless defender.

Bo Jackson became a national sensation while he was at Auburn, where he won the Heisman Trophy in 1985.

Six years later, he was a sports legend like none of us had ever seen, excelling both on the gridiron for the Los Angeles Raiders and on the diamond for the Kansas City Royals.

By the time this card was issued, though, Bo was already done in the NFL thanks to an injury he sustained during a playoff game in January of 1991.

If anything, that “what might have been” early ending made Jackson more popular than ever, and this throwback card has always tugged at collectors’ heartstrings.

Pretty much the same story with this card, except it shows the play where Jackson got injured.

As the card title indicates, there was still some doubt about whether he would make a comeback. In the end, of course, Bo did make it back to MLB, with the Chicago White Sox, but not to the NFL.

This card forever captures the sickening anticipation of Jackson’s recovery (or not).

Williams spent the first ten years of his 14-year career with the Phoenix/Arizona Cardinals, who put up just one winning season during that run.

No doubt those second-division finishes hurt Williams’ exposure, but he was a lockdown cornerback who recorded 55 interceptions and returned nine for touchdowns in his NFL tenure.

Of course, Williams’ last four seasons were spent with the St. Louis Rams during the Kurt Warner years, so the long-suffering DB finally did get plenty of playoff limelight.

He also garnered a Hall of Fame nod in 2014, which boosted the visibility and popularity of this Pro Set rookie card.

By 1991, Sanders was an NFL superstar who had run for more than 1300 yards in each of his first two years in the league and who had nabbed his first rushing title in 1990.

Sanders cards have been popular in the hobby from the get-go, and this second-year flashback to his 1988 Heisman Trophy performance with Oklahoma State is no exception.

This card commemorates the 1990 showdown between Jackson’s Raiders and Sanders’ Detroit Lions in the Silverdome.

The Raiders prevailed 38-31 in a thriller that saw the two running backs combine for 305 yards on the ground.

Part of the popularity of this card owes to the existence of two variations — with and without the NFLPA logo on the card back.

But you can’t discount the effect that featuring two all-timers on one hunk of cardboard has on collector affections. 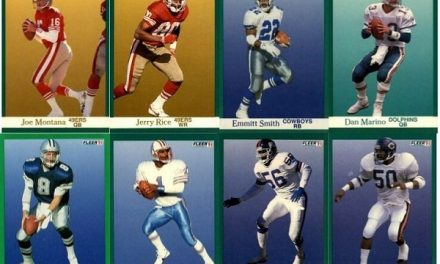 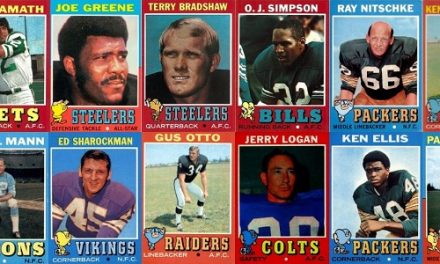 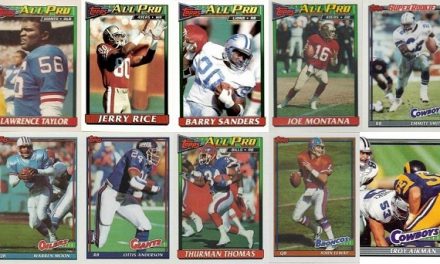 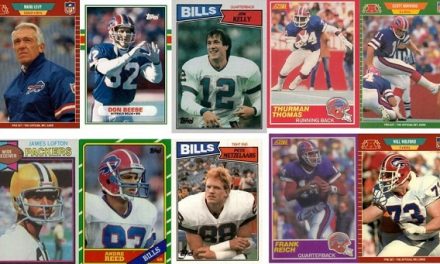