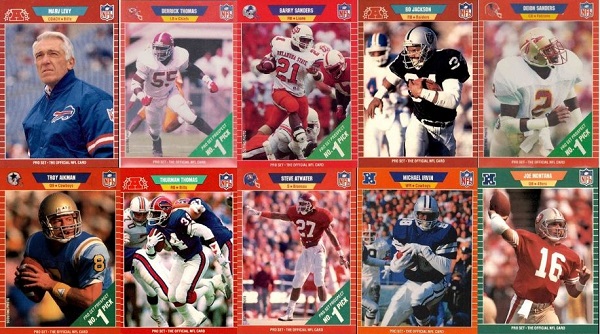 It may be hard to imagine now if you weren’t involved with the hobby at the time, but 1989 Pro Set football cards were a historic issue.

Prior to that time, Topps had been the only gridiron game in town (unless you count the team-action Fleer issues) for nearly a quarter century, and football made up a tiny portion of overall hobby revenue.

Pro Set founder Lud Denny had big ideas, though, and he brought slick card production to bear along with even slicker marketing that helped catapult the FB card boom in the early 1990s.

And while none of the 1989 sets — Topps, Pro Set, fellow newcomer Score– are scarce, they all represent a unique moment in hobby history.

With that in mind, here are the most valuable 1989 Pro Set football cards, based on recent eBay sales for cards in PSA 10 condition.

Was Barry Sanders the greatest running back of all time?

The raw counting stats say that honor belongs to Emmitt Smith, and old-timers will tell you it’s Jim Brown, hands down.

But the 1988 Heisman Trophy winner played for some not-great Lions teams and still managed to win four rushing titles and pull within about a season’s worth of work behind Walter Payton‘s (then) yardage record before abruptly retiring at 30.

The “what if” surrounding Barry has intrigued collectors for two decades, and his Pro Set rookie card is the first-stringer here, pushing triple digits in perfect graded condition. It is undoubtedly the king of the 1989 Pro Set football cards.

Levy didn’t nab his first NFL head coaching gig, with the Chiefs, until he was 53 in 1978. He stuck around for five so-so seasons, guiding the team to just one winning season (9-7 in 1981) in no playoff appearances.

Then, he was gone from the NFL scene (though he did coach the Chicago Blitz for a season in the USFL).

But when Bills owner Ralph Wilson fired Hank Bullough midway through the 1986 season, he turned to Levy to turn things around.

And so he did.

With the help of superstars like Jim Kelly, Thurman Thomas, Bruce Smith, Pete Metzelaars, Andre Reed, and a strong supporting cast, Levy had the Bills in the playoffs by 1988.

Two years later, they were in the Super Bowl and they would return each of the three years after that.

It hardly seems to matter now that the Bills lost all four of those Big Games — this was a great team, and Levy is a Hall of Famer.

After the Cowboys selected Irvin with their first pick in the 1988 NFL Draft, it took awhile for him to settle in as a featured receiver, and controversy followed him like yesterday’s bad burritos.

Dallas made the playoffs that season and would go on to run off three titles from 1992 through 1995.

Irvin had off-and-on problems outside the lines and retired at age 33, but he kept it all together well enough to catch 750 balls for nearly 12,000 yards, and he made the Hall of Fame cut in 2007.

Neon Deion was that “other” two-sport athlete … the one who rode Bo Jackson‘s coattails in the “what’s possible” sweepstakes.

But, while Bo may have had more overall combined talent in baseball and football, Sanders avoided the devastating injuries that curtailed Bo’s promise and crafted a longer career.

And, by focusing on the NFL in the long run, Deion turned himself into a Hall of Fame cornerback.

Aikman inherited a woeful Cowboys team in 1989, and even the hotshot rookie couldn’t save them from a 1-15 record that fall.

Within a couple of seasons, though, Aikman had teamed with head coach Jimmy Johnson and offensive coordinator Norv Turner to figure out how to take full advantage of big weapons like Irvin, Smith, Daryl Johnston, Alvin Harper, and Jay Novacek.

The result was a four-year run that had “dynasty” written all over it, and a place in Canton for Aikman.

Today, his Pro Set rookie card stands right there on the frontline with teammates Neon and Irvin.

Thomas was the workhorse of those great Bills offenses in the early 1990s, routinely topping 270 carries per season, and surpassing 300 twice, including a league-leading 355 in 1993.

The man could also catch the ball, as evidenced by his 472 grabs for 4458 yards and 23 receiving touchdowns over his career.

It all added up to legend status for Thomas in Buffalo, not to mention a Hall of Fame bust.

Jackson was the most tantalizing athlete most modern fans have ever seen.

The man could do just about everything on the football field — and do it well — but he could also do plenty of things on the diamond, with all sorts of in-the-rough baseball skills.

And Jackson made it work in both sports for awhile, until that hip pointer suffered with the Raiders killed his football career and curtailed his baseball progress.

No matter how far he got in fulfilling his giant promise, though, Bo never really fades completely from the hobby limelight.

A few years after this card was issued, Montana was gone to the Kansas City Chiefs, with Steve Young taking over the pocket in San Francisco.

But in 1989, Montana was still the man, and he led the 49ers to their fourth Super Bowl title.

While others have surpassed Montana in sheer numbers and even rings (thanks, Tom Brady), he will always be a football deity.

In 11 seasons with the Kansas City Chiefs, Thomas was a Pro Bowler nine times and collected first-team All-Pro honors twice.

He also amassed 126.5 sacks with a combination of speed, size, and strength that opposing O-lines found tough to combat.

Sadly, Thomas passed away as a result of injuries he suffered in a January 2000 car accident … but he retains his stature in the hobby even though his story was cut way short.

Thomas lines up here north of $10 in perfect slabbed condition.

The Broncos took Atwater with their first pick (20th overall) in the 1989 NFL Draft and plugged him right into their defensive backfield.

He contributed three interceptions that rookie season to help Denver all the way to the Super Bowl (where the Niners trounced them, 55-10).

Atwater spent most of the 90s picking Pro Bowl and All-Pro honors before winning two rings with the Broncs in 1997 and 1998. 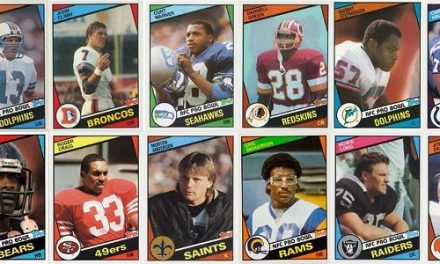 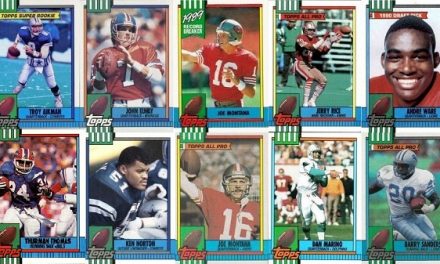 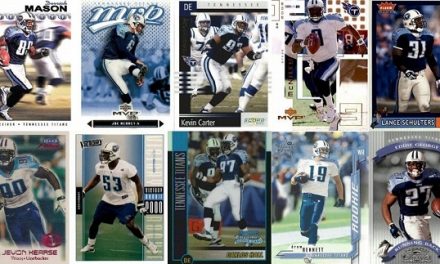 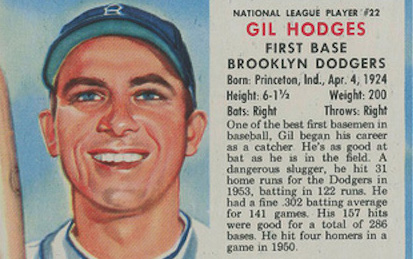