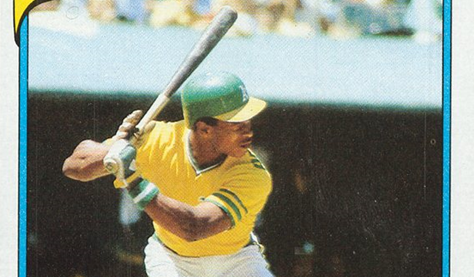 The 1980 Topps Rickey Henderson rookie card was a product of its time … but just barely!

Even as collectors were pulling the Rickey rookie from wax packs during that summer of the U.S. Olympic boycott, Fleer was taking down the Topps monopoly in the denouement of a years-long court battle wound down.

And, so, the next year, rookie cards came in three flavors — Topps, Fleer, and Donruss.

In 1980, though, Topps was still the only game in town, and that left us with just one true Rickey Henderson rookie card.

Good thing it’s one of the most classic, iconic pasteboards in the whole dang hobby, huh?

We’ll get into the splendors of that beautiful card in just a minute, but first, we should acknowledge that there are some other early-career Rickey cards worth consideration. Spanning his minor league season and the first year of Fleer and Donruss issues, we’ll call them his peri-rookie cards.

And we’ll run through them all below, with pricing information culled from actual selling prices, focusing on PSA 9 copies unless otherwise noted.

Of course, there’s only place start …

(Note: The following sections contain affiliate links to eBay and Amazon listings for the cards being discussed.)

When Henderson stormed to 100 stolen bases in 1980, his first full season in the majors, he set his 1980 Topps rookie card on a path toward hobby stardom.

Truth be told, though, it took collectors a while to fully warm up to the splendors of this card.

For one thing, The Strike of 1981 that split the summer in two dampened Rickey’s steals total to 56, and nearly everyone paled in comparison to the glare emanating from Los Angeles that season.

Yeah, rookie Fernando Valenzuela and his Fernandomania swallowed up most of the 1981 limelight.

With 22 steals by the end of April, Henderson made it clear that he had both the wheels and the will to take aim at Lou Brock’s single-season stolen base record of 118, set in 1974.

By season’s end, Henderson had declared himself the Man of Steal by virtue of an incredible 130 thefts, a record that still stands today.

As the hobby heated up over the next few years, fans and collectors alike began to realize that Henderson wasn’t just some one-dimensional speedster – he was maybe the perfect embodiment of the ideal leadoff man.

Before you knew it, Henderson’s 1980 Topps rookie card was pushing past $3 a pop, one of the first “new” cards to break that barrier.

A trade to the Yankees in December 1984 opened up a whole new world of glitz and glamor for Rickey, and he busted right through the door.

By the time he came back to Oakland as a free agent in 1989, Henderson was a mega superstar, and it was a foregone conclusion that he would both break Brock’s career mark for steals and cruise into the Hall of Fame.

Before all that could transpire, though, Henderson decided he needed something else on his resume, so he uncorked 28 homers, led the majors with 119 runs, copped another American League stolen base crown with 65, and hit .325 to nab the 1990 AL MVP award.

The career SB record fell in 1991, pouring more fuel on the fire, and Rickey’s RC has generally outpaced the market at large in the 30+ years since.

Today, his 1980 Topps rookie card is a stone-cold hobby classic, a brutally beautiful as it is important, and it makes collector hearts sing wherever and whenever it sees the light of day.

And, really, it was sort of a surprise that they showed up in 1981, given all the hype around Fleer and their antitrust victory over Topps.

So … this concerned-looking “First Donruss Card” of Henderson is something of a bonus, even if it’s printed on tissue paper and as fuzzy as your grandma’s slippers.

It’s a must-have for Henderson collectors, in other words, and qualifies as a sort of honorary rookie card seeing as how it was Big D’s first chance to issue a Rickey.

Fleer was too busy fighting court battles with Topps to actually make any baseball cards in 1980 – you know, besides the fact that they also weren’t licensed to do so yet.

So, like Donruss, Fleer had to wait until 1981 to issue their Henderson “rookie” card.

The upstart made up for lost time, though, by issuing two First Fleer Cards of Rickey in 1981, beginning with this one that celebrates his 1980 stolen base title. It’s sort of a dark image, but still a good-looking card overall.

It does seem to suffer a bit, pricewise, in comparison to Henderson’s “base” card from the 1981 Fleer set.

“OK, Rickey, turn your head to the right. That’s it. A little farther – look into the stands above homeplate. Perfect.”

Those might have been the words uttered by the Fleer photographer as he stepped back a couple of paces, or unzoomed his lens a bit, after snapping the shot for “MOST STOLEN BASES AL” above.

Because, as you can see, this first Henderson base Fleer card features a nearly identical image, right down to the fan in red in the stands just off to the side of Rickey’s right arm.

Of course, this one could have been shot first, and that directive up there reversed.

But, given this card has the higher number, that would be sort of backwards. And far be it from 1981 Fleer to have committed any errors.

Fleer *really* loved this Henderson-kneeling-with-bat tableau back in 1981.

This one matches the stolen-base-king card from the regular Fleer set, which makes sense seeing as how it was Rickey’s steals that landed him a slot in this one.

Collectors were just happy to have yet another new set that summer, and pretty surprised that Fleer’s 128 stickers were actually full-sized cards whose fronts just happened to peel off … if you were some sort of maniac who defaced baseball cards, that is.

Back in 1977, less than a year after the A’s picked Henderson in the fourth round of the ‘76 draft, the young outfielder found himself patrolling the outfield for the Single-A Modesto A’s.

He was on his way up in a hurry, and Chong Enterprises captured the moment in a clunky, black-and-white, error-laced, but altogether glorious card as part of a Modesto team set.

Accordingly, we’ll focus on PSA 8 copies for pricing since this is more or less a family channel, and the higher grades are downright obscene. As it is, pretty much all bets are off whenever this card changes hand in any condition.

By 1979, Rickey had his sights set on the majors, but he stayed grounded and focused enough to hit .309 with 44 stolen bases at Triple-A Ogden in a partial season.

Partial because the big league A’s came calling at midseason, and Rickey stole 33 bases while hitting .274 in 89 games for Oakland.

He never looked back.

His fans in Ogden got the chance to reminisce that summer, though, as Henderson appeared in the team set from TCMA, which was starting to become mainstream.

Compared to the Chong card above, this one is much more plentiful, even in higher grades (values below are for PSA 9 copies). 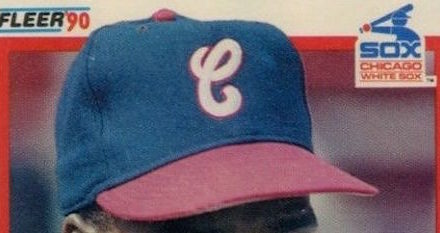 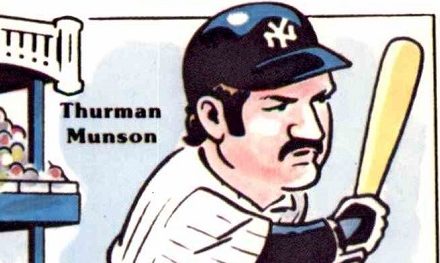 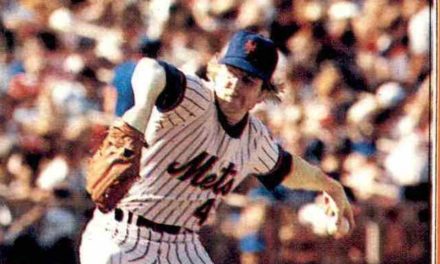 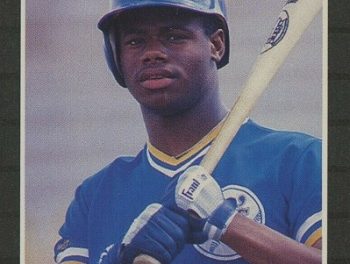 Where to Buy Rookie Cards: A Complete Guide