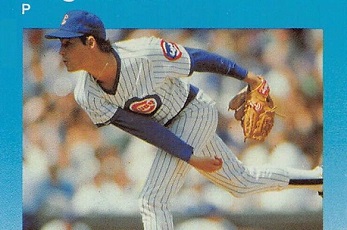 As last place clubs go, the 1987 Chicago Cubs had a few things going for them.

For one, they toiled in a pretty tough National League East division that featured the eventual NL pennant winners, the St. Louis Cardinals, and two other 90-game winners (Mets and Expos).

Put the Cubs’ 76-85 record over in the NL West, and they’d have finished third.

Among those, all but Sutcliffe would eventually wind up in the Hall of Fame.

And there were promising youngsters on the roster, too, like (then) outfielder Rafael Palmeiro and shortstop Shawon Dunston.

No wonder the Cubs were able to reclaim the NL East flag a couple of seasons down the road, huh?

For the sport at large, though, and for collectors, Dawson was the main Wrigley Field attraction that summer thanks to his home run barrage and the quiet revenge he was exacting on the rest of the league for letting him sit on the free agent shelf until Spring Training.

We couldn’t wait to get our hands on Hawk’s first Cubs baseball cards, which for most of us meant holding out until the fall, when Topps Traded and Fleer Update would save the day.

(Though, to our delight, Donruss Opening Day swooped in months earlier to deliver Dawson in Cubbies pinstripes.)

By the time those little 132-card boxes did arrive on dealer shelves and at card shows across the land, Dawson was a legend — 49 home runs and 137 RBI in a “challenge” season will do that for a guy.

But in our rush to get at those first(ish) Dawson Chicago cards, most of us probably blew right past — or never even got to — another Cubs cardboard debutante.

Because, there in the middle of both sets, is a young righthander named Greg Maddux, following through in his Cubbies uniform. The Topps card, like the Donruss Rated Rookie from earlier in the year, shows the rookie hurler sporting his beginner mustache and wearing road blues.

That 1987 Fleer Update card of Maddux, though, at #U-68, gives us the first real glimpse of the tableau we’d come to expect within a few short seasons …

That fresh-faced, cleanshaven Maddux, delivering his pitch in the Wrigley sunshine and wearing long sleeves under his pinstripes to ward off the cold, home dugout in the background, would win 18 games in 1988 and 19 in 1989.

By 1992, he’d cop his first Cy Young Award before heading off to the Atlanta Braves and his date with destiny … and Cooperstown.

Today, that 1987 Fleer Update Maddux rookie card of his doesn’t get a ton of attention and isn’t as familiar to most hobby eyes as his Donruss Rated Rookie, but it remains a gem of a debut … even if it’s not super expensive.

And, if you want a Maddux rookie card from his actual rookie season, and showing him in his pinstriped roots … well, there’s really no substitute.

And, if you want a Maddux rookie card from his actual rookie season, and showing him in his pinstriped roots … well, there’s really no substitute. 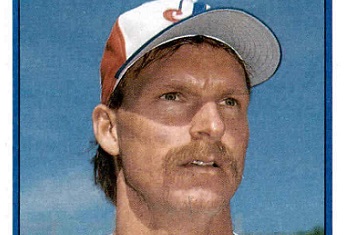 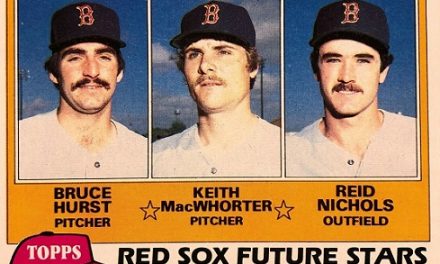 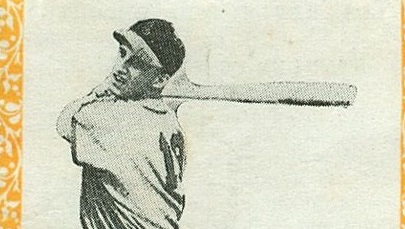 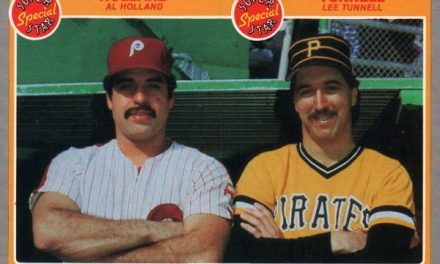