Baseball Card Proof that Steve Carlton Was Once the Strikeout King

Did you know that Steve Carlton was the all-time leader in strikeouts?

Well, it’s the truth, and I have baseball card proof. 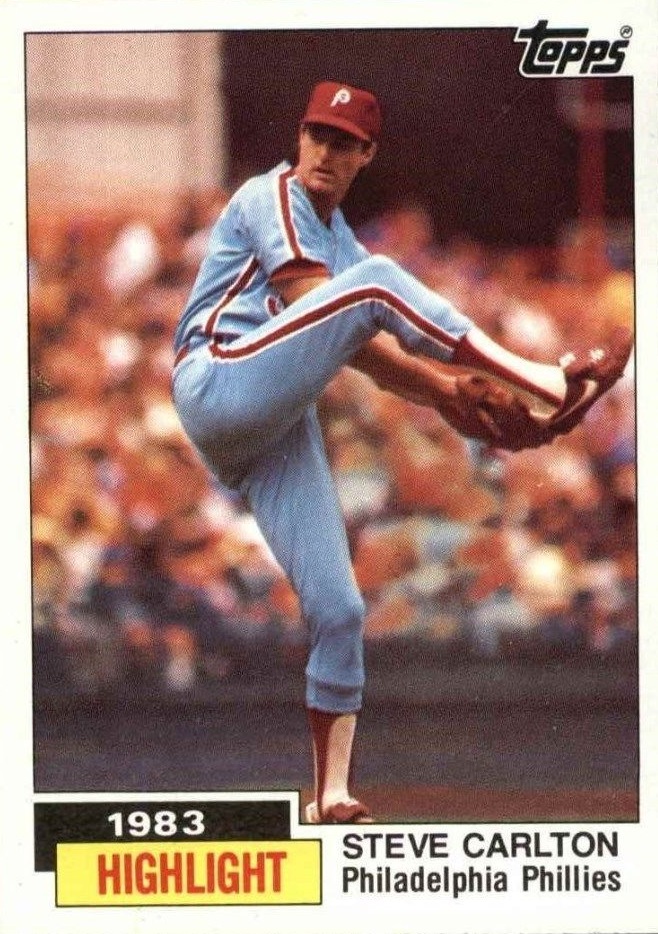 (OK, so you can’t tell much about the “highlight from that card, but trust me here … and read on for more proof.)

See … Carlton ended the 1983 season as the all-time K leader after taking down the record that Walter Johnson had held for nearly 56years.

And that wasn’t the only big thing about 1983 for the man whom many considered, at one time, to be the greatest left-handed power arm ever.

Sure, he had won the Cy Young award in 1982, but many in the game thought his age was about to catch up with him. The end — or at least an earnest decline — couldn’t be far away, the pundits said.

And then there was the little matter of that strikeout record. Although Carlton had been on a bead to catch Johnson ever since his breakout 1972 season, when he fanned 310, he had spent most of his career lagging behind oldster Gaylord Perry in total Ks.

Worse, fireballer Nolan Ryan had jumped ahead of Carlton in 1977, and Lefty was having a hard time regaining the strikeout lead. Carlton could take some solace in the knowledge that most observers considered him a far superior pitcher, but the fact remained that Thrower Ryan stood ahead of him on the all-time list.

It was a thorn in Lefty’s side, and he was determined to grab that strikeout title first and hold onto it for good.

But beyond individual goals and shoulder chips, Carlton wanted something else — another title.

After all, he had spent those putrid years of the early-to-mid-1970s pitching like a modern-day Johnson while the Phillies stunk up Veterans Stadium all around him. Carlton’s 27 wins for a team that won only 62 in 1972 is a feat that will be hard to match.

Thanks partly to Lefty’s brilliance, though, and thanks partly to young talents like Mike Schmidt and Greg Luzinski, the Phillies started to pull out of their funk as the 70s passed their midpoint. When Pete Rose, Tug McGraw, Garry Maddox, and others found their way to Philly late in the decade, the Phillies were legitimate championship contenders.

The breakthrough came in 1980, when they put it all together to win the World Series over the Kansas City Royals in six games. 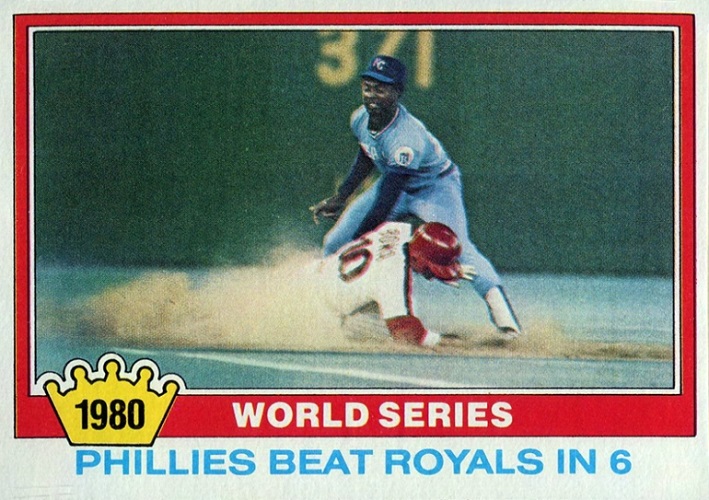 Things didn’t go quite so well in 1981 or 1982, though, and the Phils missed the playoffs both years.

That second offseason, desperate for a return to glory, the front office brought in Joe Morgan and Tony Perez  to complement former Big Red Machine teammate Rose, and the Wheeze Kids were born.

Although derided for their collective ages — five players on the roster were older than 40 by season’s end — Philadelphia won the National League East title and downed the Los Angeles Dodgers in four games in the NLCS.

Only a young and hungry Baltimore Orioles team, led by Cal Ripken, Jr., and Eddie Murray were able to stop the Phils from capturing their second title in four years.

Along the way, Steve Carlton had to learn to deal with disappointment.

First, Ryan came out of the gates with his (right-arm) gun a-blazing and sailed past Johnson’s strikeout mark on April 27 It would take Carlton until May 20 to move into second place. 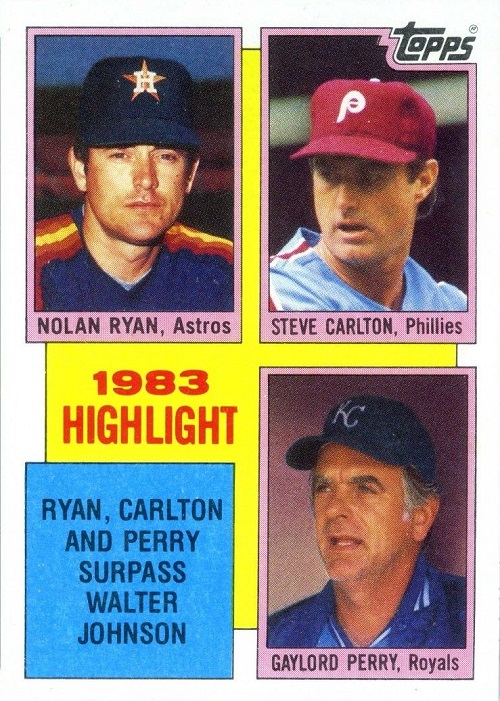 Then, new(ish) acquisition John Denny emerged as the ace of the Phillies’ staff and eventually copped the Cy Young award with his 19-6 record.

But Mr. All-Timer wasn’t done with glorious moments — not by a long shot. 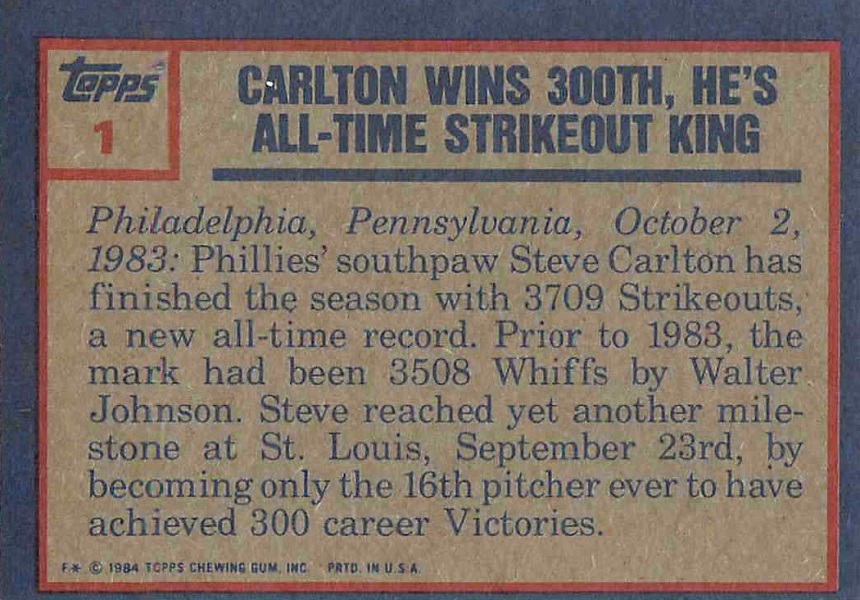 And, as Denny and the rest of his Phils’ teammates pulled the headlines, and as Ryan ran out of steam through the summer, Carlton quietly put together one of his biggest strikeout years, eventually notching 275 knockouts.

By the time Gaylord Perry also moved past Johnson on the K list on August 13, Carlton had claimed the Number 1 spot, and people started to take notice of him again.

Honestly, many — if not most — thought he would ride out the rest of his career in first place and would probably last longer than Ryan.

Of course, things didn’t quite play out that way.

While Perry retired after that record-breaking season, Carlton and Ryan soldiered on.

There was at least some chatter that Carlton was really ready to retire but that he didn’t want to let Ryan have a shot at regaining the strikeout crown.

The events that unfolded through the middle and late Eighties lend some credence to that idea, too.

The main problem was that Nolan Ryan just refused to age. In fact, he only got better as the decade progressed, even while Carlton was scrapping to be even effective. 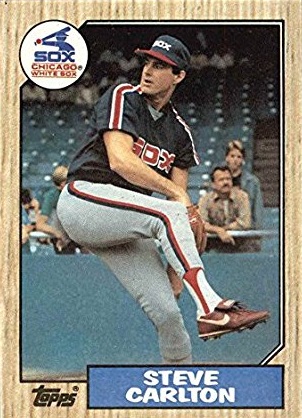 After two mediocre campaigns, the Phils released Carlton in June of 1986, and the San Francisco Giants signed him on July 4.

Just over a month later, San Fran released him, too, and the Chicago White Sox picked him up for the stretch run.

The Sox let Carlton walk after the season, and the Cleveland Indians signed him for 1987, then traded him to the Minnesota Twins at the trade deadline.

Minnesota released him in December, re-signed him in January of 1988, and then released him for good on April 28 after he picked up five final strikeouts in four appearances.

After 24 seasons in the Big Leagues, Carlton was finished, and not exactly on his own terms.

In the meantime, Ryan had blown by Lefty and would pitch for another five seasons, finishing with 5714 strikeouts, enarly 1600 better than Carlton’s final mark.

But for one glorious offseason, Steve Carlton was the all-time strikeout leader … and his baseball cards prove it. 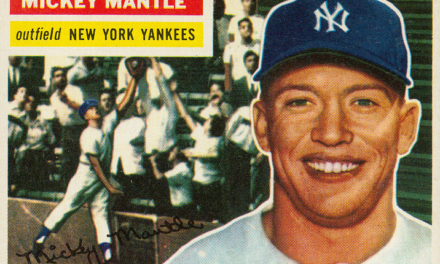 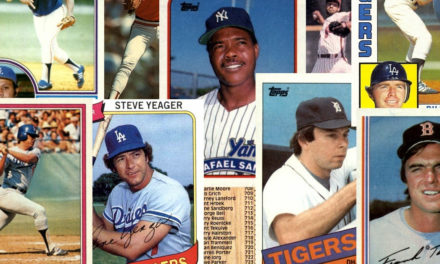 Behold … the Last Topps Baseball Cards of the 1980s 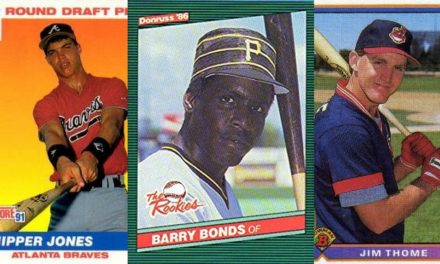 Collectors’ Vote: Which Players Would You Include on Your 2018 Hall of Fame Ballot? 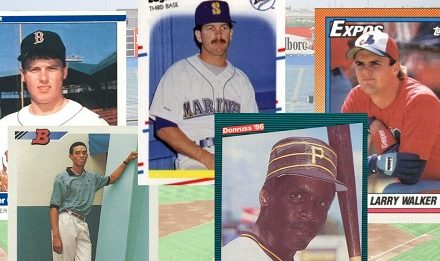 Collectors’ Vote: Which Players Would You Include on Your 2019 Hall of Fame Ballot?