The Lies Told by the 1977 Topps Jim Umbarger Baseball Card 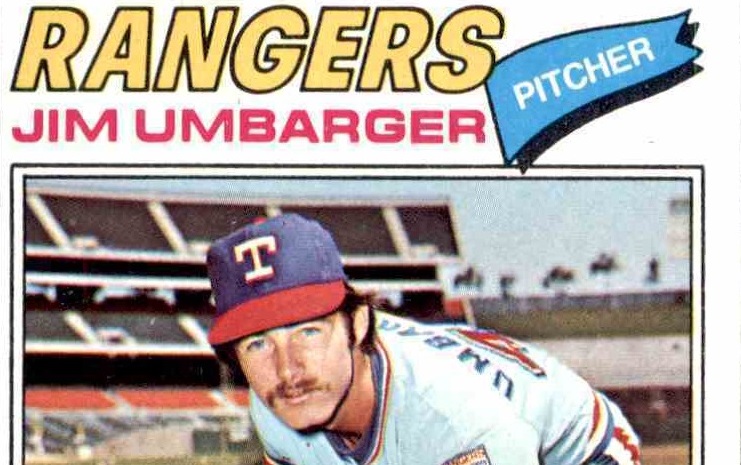 Take one look at the 1977 Topps Jim Umbarger card, and you know exactly who you’re dealing with.

Here is a compact, intense hurler who will stare you down and emblazon a scar across your soul with with his fiery gaze and molten will.

He’s down in the grass, scrapping for every competitive advantage and won’t let you get past him, no matter what weapons you bring to the plate.

Crouching, mustachioed, guttural confrontation awaits if you dare challenge him. 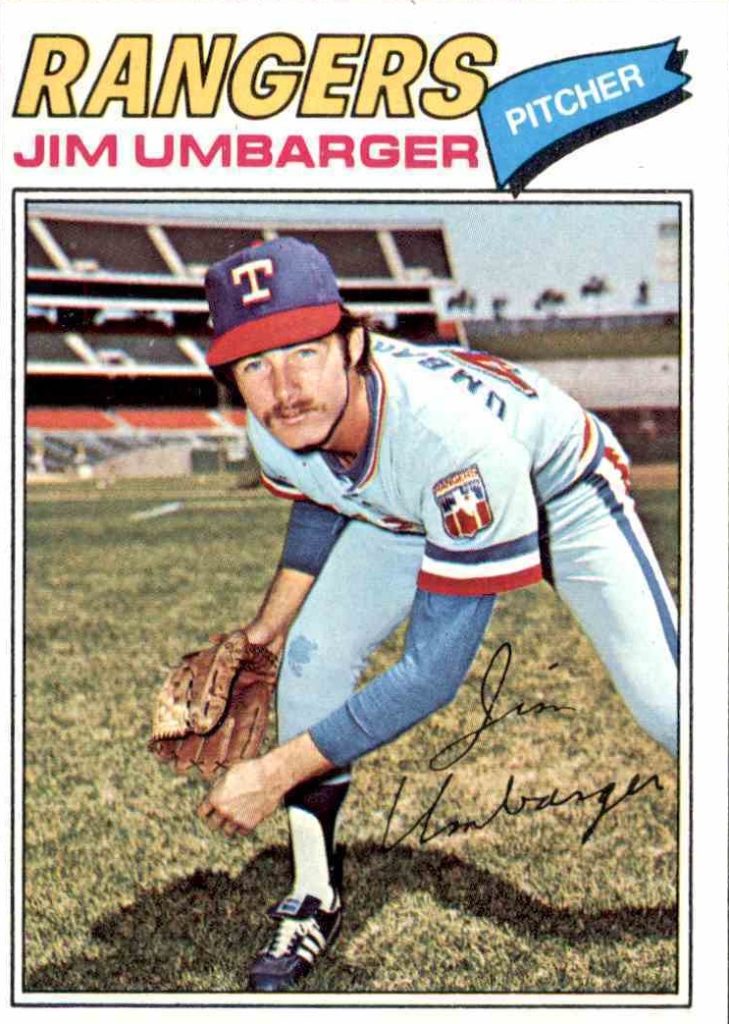 Except it’s all a lie.

Or, at least it seems that way based on the other evidence available to us.

None of which is to say that Umbarger wasn’t a good pitcher.

After all, he turned down the Cleveland Indians, who picked him in the second round of the 1971 MLB draft, to play baseball at Arizona State University. After three years in Tempe, Umbarger’s stock slid, but the Texas Rangers still took him in the 16th round in 1974.

But just look at his 1976 Topps rookie card, and you’ll see more of the next year’s deceit: Umbarger was long and lean, clean-shaven, even smiling. Same story (except the “clean-shaven” bit) if you look at his 1979 Topps card or his 1979 TCMA Tucson card or most of the images you can find of Umbarger on the web. 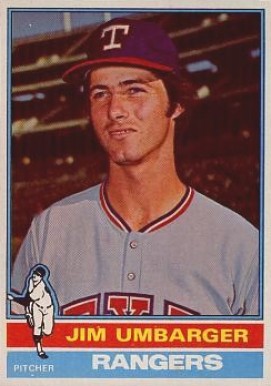 This was no Crouching Tiger … he was a Fearless Crane.

And the fact that Umbarger’s 1977 card pictures him with the Rangers is misleading, too, especially considering that Topps didn’t issue a card of Big Jim in 1978.

I mean, sure, Umbarger played all of 1976 with the Rangers, but Texas traded him to the Oakland A’s just before the 1977 season began. He surely was the main target for Oakland in the deal that brought Claudell Washington to Arlington and also sent Rodney Scott to Oakland.

Texas thought he still had something left at just 24 and “purchased” him from the A’s in late August as they made a push for the division title. Down the stretch, Umbarger went 1-1 with a 5.54 ERA. Better, but still smelly.

Of course, Topps wouldn’t have had time to show him in an A’s uniform given the March timeframe of that initial trade and the fact that they didn’t issue a traded set that season.

And the 1978 card, which they mercifully skipped considering Umbarger’s record in ’77, would have shown him as a Ranger, too.

Given those constraints, we can give Topps a pass on never having pictured Umbarger in any uniform but the red, white, and blue (of various shades) of the Texas Rangers. 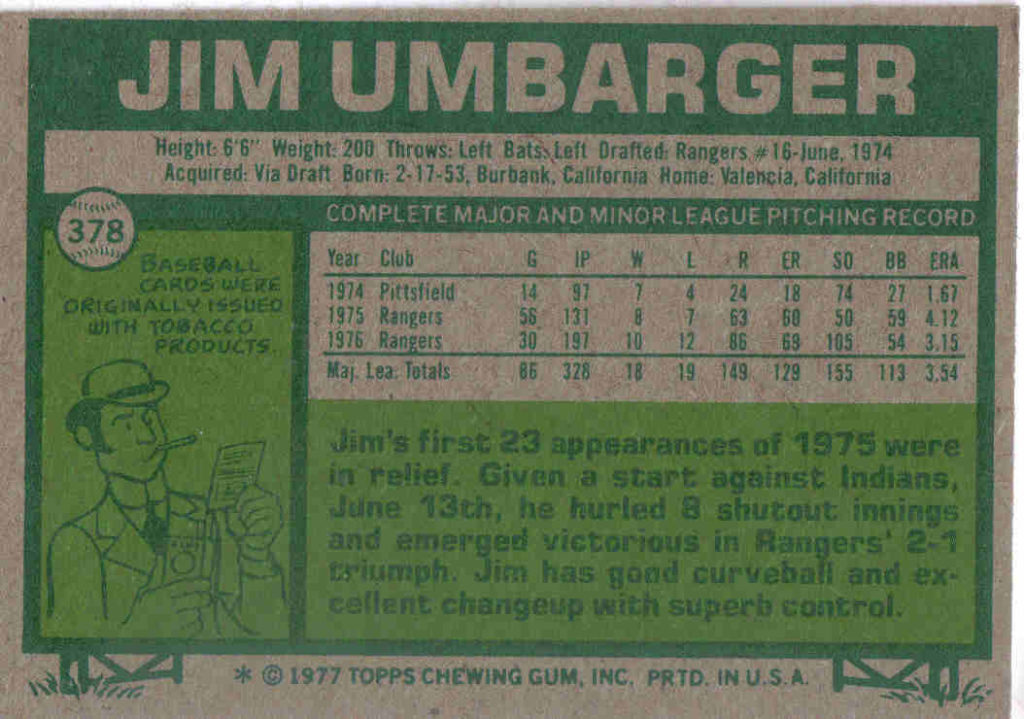 There’s more deception to be had when you flip over card #378 in the 1976 Topps set, though. There in the sidebar, the caption of a cartoon featuring a dapper smoking man in a derby read:

But it’s no slam dunk and somewhat depends on your definition of “baseball card.”

Both Wikipedia and Cycleback call out promotional cards issued by sporting goods manufacturer Peck and Snyder in the 1860s as the first baseball cards.

And an 1863 Harry Wright card that was used to draw visitors to St. Georges’s Cricket Grounds sold for big bucks a few years back.

Tobacco cards started to pop up in the 1880s, with candy cards not far behind.

Not a big deal?

But Jim Umbarger, one of baseball’s Fearless Cranes who got scant little attention during his brief Major League career, deserves better.

He deserves the truth, like this tidbit from his Wikipedia page:

Of note, during his pitching wind up, Jim Umbarger’s hat often would fly off.

Now, that would have been a great cartoon. 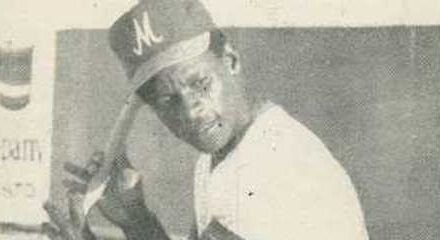 The First Rickey Henderson Baseball Card Got Caught Off Base … But Still Scored! 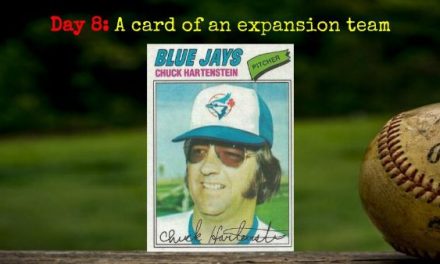 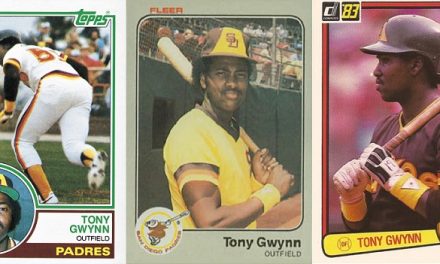 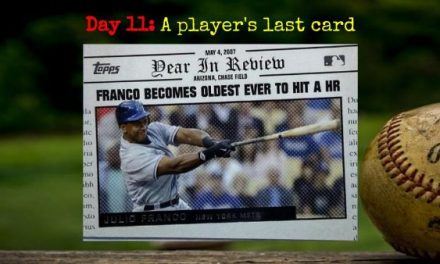