Emmitt Smith rookie cards roll up a ton of hobby history — and NFL history — in their compact packages…sort of like the man himself.

These pasteboards were there as collectors rolled out of the 1980s boom and into the cardboard mayhem that would explode in the 1990s.

They were there before anyone knew who Tom Brady or even Payton Manning was.

They were there when Barry Sanders was just getting started looking like he might be the next Jim Brown.

And the first Emmitt Smith cards were also there when Walter Payton was just a few seasons removed from his record-setting run with the Chicago Bears. When he was still a young man, nearly a decade before his untimely death.

Almost from the beginning, Smith and his cards were collector and fan favorites, owing to his amazing rookie season that produced 937 yards rushing and 11 touchdowns for a Dallas Cowboys club that looked they just might be climbing out of their own abyss, maybe on the road to being America’s Team once again.

All these years later, after the Super Bowl rings and the rushing records and the Hall of Fame bust in Canton, Emmitt and his cardboard are still favorites

So, let’s let them favor us with their historical grandeur once again, as we run down the full list of Emmitt Smith rookie cards below, with values listed for PSA 9 copies as reflected by actual sales cataloged in the PSA Auction Prices Realized tool as of May 2022.

(Note: The sections below contain affiliate links to eBay and Amazon listings for the Emmitt Smith rookie cards being discussed.)

The base design for 1990 Action Packed was almost understated compared to their All-Madden counterparts, but they felt super special at the time – thick, thick card stock coupled with gold borders, 3D embossed effects, and a super-premium price tag.

The 84-card “Rookie Update” set was issued in both set and pack form and featured rookies (#1-64) and veterans who had been traded or who were left out of the Action Packed base set.

As for Emmitt, he appears to be about ready to lower the boom on a defender … if his sidestep doesn’t pay dividends.

Part of a 58-card box set, this early Smith card lives up to its name – it’s packed with action and shows Smith as the hard-nosed, Madden-worthy player he would prove to be throughout his career.

Though technically not a rookie card since it wasn’t Emmitt’s first Action Packed card widely available through packs in retail outlets, this one is too close to the start of it all to leave out.

After missing out on Emmitt in their inaugural football base set, Fleer caught him in mid-handoff as part of their 120-card year-end Update set.

This Smith rookie is the prize of the box set, though Cortez Kennedy and Junior Seau RCs also bolster the issue.

Pro Set looked the part of an NFL-sanctioned football card, with strong photography and the league logo prominent wherever you looked.

But, even by the time the Emmitt Smith rookie card showed up in Series 2, collectors pretty much knew that Pro Set was common as mosquito-bite whelps in July … and printing quality control left something to be desired, too – smudges, streaks, damaged cards were common sights coming out of packs.

Still, the Emmitt RC has nice eye appeal and won’t break the bank.

Pro Set didn’t stop at the 700 (or so) cards encompassed by their Series 1 and Series 2 issued earlier in 1990 – how could they when there were still printing presses to run into the ground?!?

So, the Official Card of the NFL went back to work at the end of the season, cranking out a Final Update that took the checklist to #800, where Emmitt Smith appeared again, as the 1990 NFL Pro Set Offensive Rookie of the Year.

Of all 1990 Emmitt Smith rookie cards, this one is probably the one that comes closest to being “scarce,” though you have to consider that’s relative to the rest of the production numbers in the Junk Wax Era.

Still, this is Smith’s first Score card, it looks great, and it is available in fewer quantities than most of its counterparts.

Hard not to call that a winner.

Like most of its counterparts, Topps skipped Smith in its base 1990 football set, only to pick him up with Traded season came along.

The result is a kneeling, helmetless rookie card that might be slightly less plentiful than the competition proffered by Fleer and Pro Set. 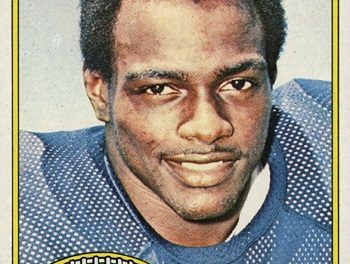 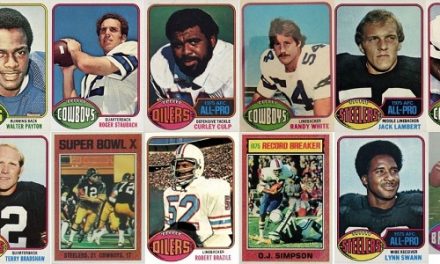 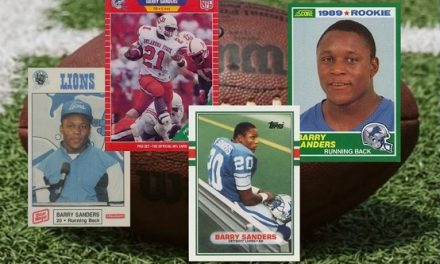 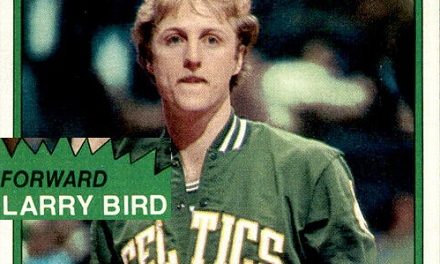