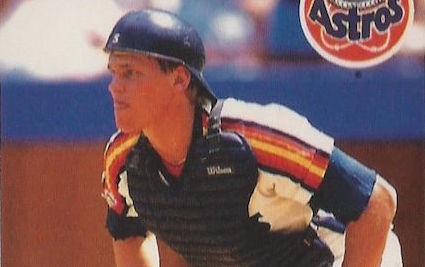 (This is the 26th in our series of posts about the best baseball cards from the 1980s. Check out the rest of those posts here.)

Do you realize just how serious Craig Biggio was about playing second base?

I mean, did you know that he used to don a face mask, chest protector, and shin guards just to take his position behind Houston Astros pitchers?

Or that he wore his batting helmet — backwards — in the field?

Or that his mitt was the size of a Charlie Kerfeld, just in case something wild happened?

You say you didn’t know any of that?

Well, take a look at card number 561 in the 1989 Donruss set and you’ll see Biggio in all his tools-of-ignorance-second-base glory. 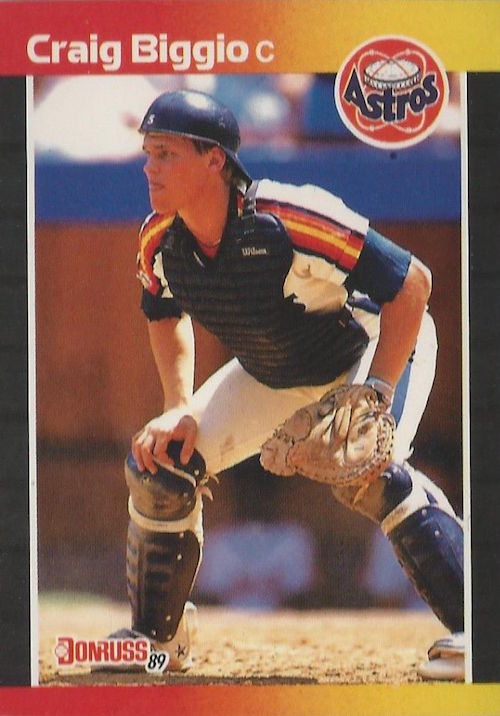 Now, sure, the position indicator at the top of the card next to Biggio’s name says “C” but we all know he was a second baseman. A Hall of Fame second baseman, in fact.

And, yes, Biggio’s page at Baseball Reference tells us that he played 428 games behind the plate in the Major Leagues. And that he won a National League Silver Slugger award at catcher the same year (1989) this Donruss rookie card was issued. And that he was an All-Star catcher in 1991.

But Biggio was a second baseman.

Known for his grit and determination.

And what could be grittier and more determined than standing there at second base, as Biggio does on his 1989 Donruss card, in full battle regalia? Just waiting for a collision or some sort of hazmat situation?

Not much that I can think of.

And besides, we’ve already had a ton of catcher cards in this series of posts about the best baseball card from each base set of the 1980s. My pledge — to myself at least — was to limit the repeats and position overlaps, so I can’t include another catcher here.

Which means that Craig Biggio is a second baseman, as everyone already knows.

Because there is little doubt that the 1989 Donruss Craig Biggio card is the best card in the set.

Not the most iconic — that’s the Ken Griffey, Jr., rookie card.

Not the most valuable — again, that honor belongs to Junior.

But Biggio does well on both counts.

So, when you consider the whole package, no one can touch Biggio.

Maybe not the design itself, because 1989 Donruss is pretty blah. 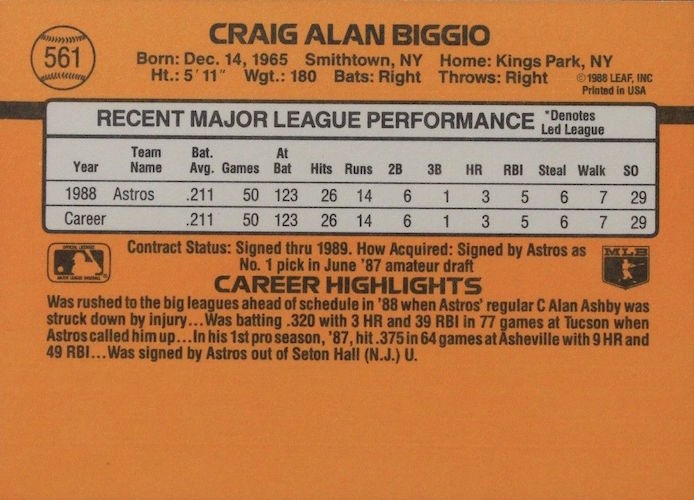 But the Astros logo is in full display on the card front, and the normally ugly fadeaway top border matches almost perfectly.

The bottom border repeats that orange-to-yellow color scheme and makes the rainbow stripes on Biggio’s shoulders stand out even more than they would on their own.

And the picture sets it all off, of course.

There stands the future HOFer, crouched and focused on the action in front of him, waiting for something to come his way. Maybe it will be a runner or a batted ball or a thrown ball.

Whatever it is, you know Biggio will handle it with aplomb, because he has the tools and he’s ready to protect his turf.

Right there at second base.

(This is the 26th in our series of posts about the best baseball cards from the 1980s. Check out the rest of those posts here.) 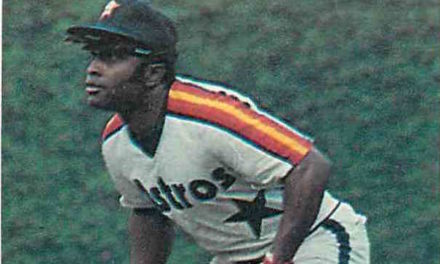 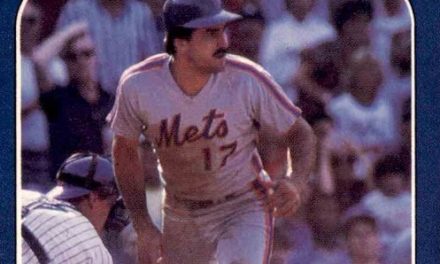 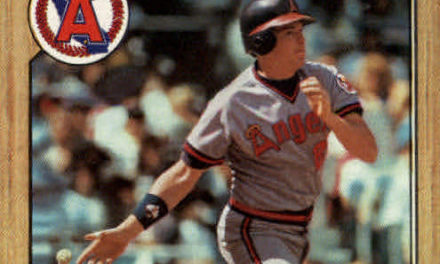 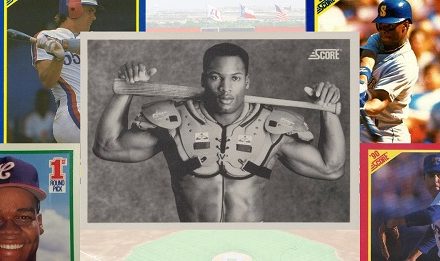 1990 Score Baseball Cards: Which Are Most Valuable?