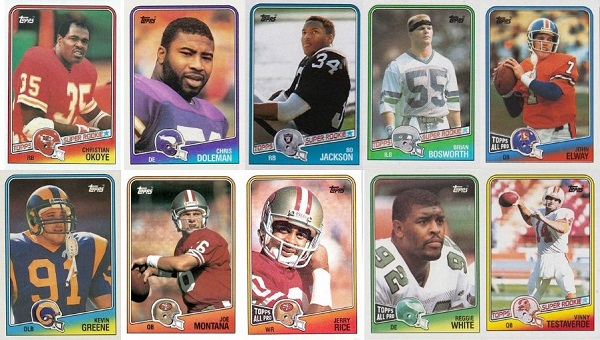 From the time they first started popping out of wax packs that fall, 1988 Topps football cards have been dominated by one name.

But, even though the Bo Jackson rookie card is unparalleled by any other player in the set, that doesn’t mean there’s nothing else to love here.

Indeed, this list of the ten most valuable 1989 Topps football cards runs the gamut from Hall of Fame rookie cards to legends on both sides of the ball.

Unless they were alive in the 1910s or 1920s to witness Jim Thorpe, no one had ever seen an athlete quite like Bo Jackson when the 1980s rolled around.

I mean, here we had a guy who won a Heisman Trophy and led Auburn to a national championship on the gridiron, but who also had scouts drooling at his baseball potential.

And, sure, we’d seen this sort of thing before — Dave Winfield, for instance, was drafted into the NBA, MLB, and the NFL.

But no one had really tried to bite off a career in two pro sports at once — not seriously.

Bo wanted it all, though, and so did collectors.

So, as Bo began running roughshod over NFL defenders on Sundays for the Oakland Raiders and crushing the ball for the Kansas City Royals in the Majors, we all clamored for his cards.

Not surprisingly, Bo cardboard in both sports climbed into the upper reaches of new-card prices.

And, even though a hip injury eventually curtailed Jackson’s greatness, the mystique and flash of those few glorious years are hard to let go of.

At 6’1″ and 253 pounds of pure muscle, Okoye was a frightening sight bursting out of the Kansas City Chiefs backfield.

For a stretch of about four or five years, though, there was no more electric runner in the entire league.

Reggie White led the NFL in sacks for the first time in 1987, recording a whopping 21 for the Philadelphia Eagles.

This $35 card (PSA 10) shows Reggie as he looked in that breakout season, right as he was building a reputation as one of the greatest defensive ends ever.

The first big-dollar free agent signing ever, White would play a key role in the 1996 Green Bay Packers’ Super Bowl championship on his way to the Hall of Fame.

Bosworth played only three seasons and never lived up to the hype that surrounded him when the Seattle Seahawks took him with the first pick in the supplemental round of the 1987 NFL Draft out of Oklahoma.

But the build-up around the Boz — a Heisman Trophy finalist in 1986 — was strong enough to make his rookie card a hot item in the hobby.

Some of that sheen remains even today, and a PSA 10 copy will set you back around 25 bucks.

The Rams took Greene with the 113th overall pick in the 1985 NFL Draft out of Auburn.

From that inauspicious beginning, though, Greene built himself into a five-time Pro Bowl and two-time All-Pro selection as a linebacker.

He became a mainstay of playoff teams in L.A., Pittburgh, Carolina, and San Francisco, and his efforts eventually landed him a bust in Canton.

By 1988, Elway’s reputation was well established — he was a super talented quarterback who put up big stats but couldn’t win the Big Game.

Literally, he couldn’t win the Super Bowl, having dropped two in a row in blowout fashion. A third would follow in 1989, and then nothing for eight long years.

But in 1997, with his career drawing to a close, Elway led his Broncos to a 31-24 victory over Brett Favre and the Green Bay Packers in Super Bowl XXXII.

On the other hand, Montana’s legend was already impeccable by 1988, what with two rings and a slew of comebacks on his resume.

Two more Super Bowl titles the next couple of years would only solidify his place as an all-time great.

Montana’s 1988 Topps card lines up around $20 in perfect graded condition.

As Montana’s favorite target, Rice had recorded consecutive 1000-yard seasons and led the NFL in receiving touchdowns in 1986 and 1987 when this card found its way into collectors’ hands.

Dude was just getting started, too, as his career would leave him as pretty much everyone’s pick as the greatest receiver of all-time and a collector favorite.

Rice’s second-year Topps card hammers down around $20 in PSA 10 condition.

The Vikings took Doleman with the fourth overall pick in the 1985 NFL Draft and gave him a couple auditions at linebacker in 1985 and 1986.

It was a 1987 move to defensive end, though, that changed the course of his career and set him up as the Reggie White of the old NFC Central.

Doleman turned into a sack machine with the Vikes, peaking at a league-leading 21 in 1989, before spending five seasons with the Falcons and 49ers.

The future Hall of Famer wrapped up his career with a one-year encore in Minneapolis.

You don’t often find a quarterback with a 90-123-1 record on a list of most valuable football cards.

But Testaverde has been a fan and collector favorite since he won the Heisman Trophy in 1986, and maybe even since he won a National Championship with Miami in 1983.

After that stellar college career, it was on to the Tampa Bay Buccaneers as the first pick in the 1987 NFL Draft.

A starter in his second season, Testaverde kept plugging along through age 44 in 2007. It was a 21-year career that included stops with the Cleveland Browns, Baltimore Ravens, New York Jets, Dallas Cowboys, New England Patriots, and Carolina Panthers. 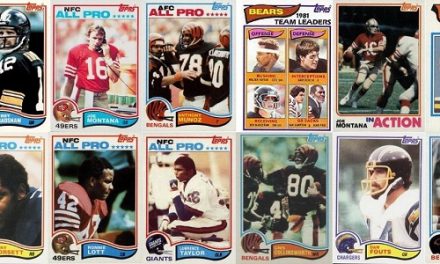 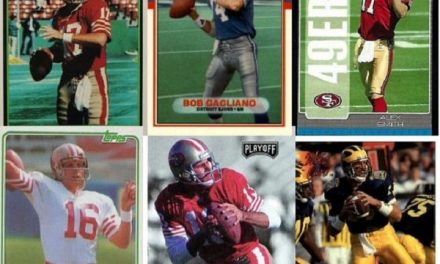 Super Bowl Pipeline? 6 Quarterbacks Who Took Snaps for the 49ers AND Chiefs … and Their Rookie Cards! 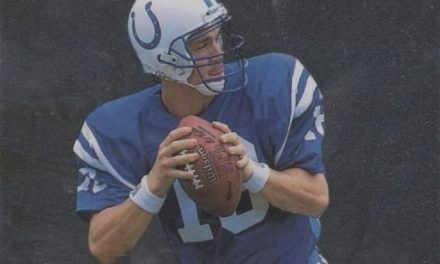 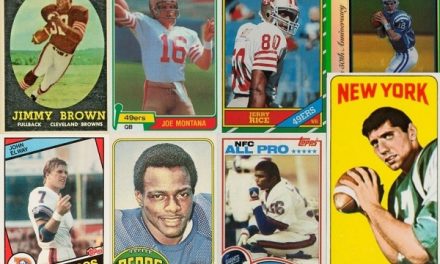